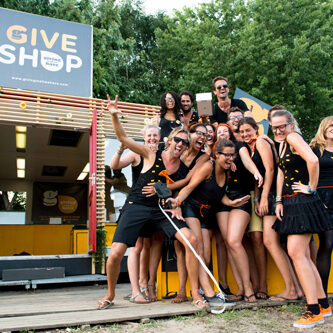 Posted at 15:53h in Inspiration, The Give Shop by Jeroen

Last weekend at Lowlands 2012, our Giving is All we Have crew have been working their asses off to help people remember what it is like to give & receive unconditionally. Results were mind boggling. Read all about it here.

So last year, I gave away my ticket to Lowlands Festival. A lot of beautiful stuff has happened ever since. Meanwhile, the festival director of Lowlands asked me to come up with a proposal of getting my philosophy running at Lowlands 2012.

The concept was quickly defined , we decided to organise a shop where people couldn’t buy anything, but where they could only give.  Which could be anything, something products, services, at Lowlands, at home. All of the necessary information (photo, name, gift given) would be uploaded to a specially developed platform where giver and receiver could connect.  The gift (if non-material/services or at home) was written down on specially designed Gift Cards and tagged with a code. This gift card would then symbolically be wrapped in a gift box which our giving crew would unconditionally give away amongst the 55.000 visitors at Lowlands.

So we gathered together a crew of 18 beautiful people that would work in shifts at Lowlands. Getting people to become conscious about the infinite potential of unconditional giving & receiving became the ultimate challenge. Using physical experience as a teaching instrument. After all, we can rationally explain our philosophy behind (which we obviously did), but the magic truly happens when people start giving!

Now, I know having no expectations is the best, but then I wouldn’t be able to say that things went far above expectations. Actually, things went crazy! The festival terrain where our Give Shop was stationed opened at 1pm. From that point on we had a continuous stream of people coming over to give. People were actually standing in line to give! Ha, what a paradox, if you consider our current economic beliefs & system.  Even the people in line were happily amazed but kept standing in line, because they were dedicated about their intention to give. Doesn’t this puts our current notion of shopping upside down? Our crew worked with four tablets to register all of the information needed.

Many visitors entered the shop wondering and asking what this all was about. After explaining that we have been building a society upon the notion of ownership and conditionality (a ‘tit-for-tat’ economy) and that we might just as well be ready to shift it into an economy from the heart, which is about unconditional giving, many became enthusiastic and willing to give. After all, we all have a heart and thus a will to give. Whether its talents, skills or products. Without expecting anything in return.

We challenged people to give something of (emotional) value. As we have previously learned from our Share & Care initiative, people are prone to give, but naturally tend to give the stuff the don’t need anymore. Whereas the magic happens when they give something from their heart. The results were amazing.

The things given? Just a quick glimpse;

Parallel to receiving all of these gifts in the Give Shop, part of our crew started handing them out amongst the 55.000 visitors. Interesting to see was that people initially responded in suspicion: there must be a catch behind?  Why else would somebody give something away? Or people would react by immediately wanting to give something in return.

In those cases, our team would explain that the stuff is unconditionally given away, and that as a receiver you thus wouldn’t have to do anything in return. What? Nothing? Nope, nothing.  To many receivers this concept felt completely new. But all of them were enlightened by the idea. The universe played some funny tricks on us as well. For example; we gave away a gift to the same person that handed it over at our Give Shop. That’s a 1/55000 chance. Apparently the gift wasn’t supposed to be given away to somebody else. ;-)

This giving thing expanded exponentially, because of the ever expanding word-of-mouth. 400 times 2 (each gift has a receiver) people directly experienced the power of unconditional giving & receiving, and we’ve had many people coming over that have heard of our initiative through friends.

On Sunday, we had nearly 400 gifts on the shelve, which we still had to hand out (we would make a picture and register the name of the receiver on each handout, and upload it to the online environment on return so that took some time as well)! The people however kept on coming. So on that day, we had to tell the visitors that we couldn’t receive any gifts anymore. We simply needed the time to hand them out at Lowlands.

So we decided flipped the theme of the shop from unconditional giving into unconditional receiving and explained people how it works. Basically receiving is receiving an act of gratitude without having to do anything in return, just like we’ve explained to the receivers strolling around the Lowlands festival terrain. Anyone who would enter the shop could pick one gift-card as a present from a yet unknown Lowlander (that’s how people call the visitors at Lowlands).

Remembering our unconditional nature turned people to the light. Our Give Shop really became what I metaphorically would like to call the G-Spot: Giving, Generousity & Gratitude.  Being around the area gave so much energy: our crew members were obviously tired after a couple of days of high-intensity work, but each time they set foot into the Give Shop and felt the good vibes that were created there, energy would rise again.

I specifically remember one case. A guy came to the shop and asked what this shop was about. I explained the concept of our Give Shop but told him that we were only handing out gifts right now, due to popular demand. And that we were going to do a test of unconditionality, in which he only had to observe what happened in his consciousness.  So I grabbed the gift cards and let him pick one randomly. To his surprise, the gift was just what he needed.

He reacted in awe and enthusiastically by saying: I want to give something as well!. ‘ Wait’ , I responded: ‘ Do you see what happens right now? You automatically want to give something in return. But that’s not necessary. This is about unconditional giving, so you don’t have to do anything in return. Just receive the gift as a token of gratitude. On this principle we strive to build our 21st Century Society. He became quiet and thanked us.

30 seconds after he left the shop literally came running back. “ You know what?”, he said, “ Over the past three hours I believed that I was done here, I was tired, not feeling that well and wanted to go home. But now, I feel completely energized and happy again! I can finally smile again!”  I was struck by the light that was ignited in him through this small gesture. Beautiful.

And this is exactly what our new society is about. Unconditional giving and receiving. It resides at the core of every single one of us. And it’s already there, we just have to remember it and act upon it.

Gratitude to the unconditional friends of Giving is All we Have

Many businesses have helped us out in this quest as well. Clockwork & Suxefully who built the online platform. MMousse, thanks for the lovely office space you’ve provided throughout the project. Oble, who provided us with the Gift Cards. Anne from Designerdutch, thanks for the ever-rockin’ awesome designs! Major thanks to Hi for providing us with the tablets we used during Lowlands Festival. We Fashion, thanks for the fashionable clothing & Suuzbisschops for the styling. Thanks to destijlfiguren for the interior design of our stand. You were amazing.  Thanks to Michiel Veenstra @ 3FM for giving away one minute of free airtime. Great!

Most definitely to be continued. Keep an eye out!

CHECK OUT THE PICTURES WE TOOK HERE!

Give Shop @ TEDx
kicking off for Lowlands 2012
Giving is All we Have at Lowlands 2012?
the Gift Philosophy: Reflections
How it started…