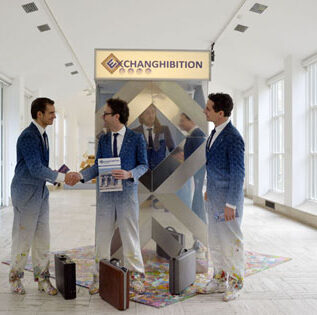 Posted at 21:11h in Consciousness, Economics, Society by Jeroen

It would be great to have a world where gift- and money economy exist side by side. A world with many different types of currencies, so you could always find the currency suitable for your needs, and money would only be considered one of many ways to exchange.

But nowadays gift- and money-economy seem too isolated from each other to peacefully exist side by side, and complement each other in our society. So maybe we should start seeing money as a gift as well. In the process of spending money, and buying things we think we need, we tend to forget that buying is actually an exchange, and not just a one-way transaction.

We don’t just obtain something material, but we give something in return: money. We can show our appreciation by giving money back with love to the people, and initiatives we love, and of whom we know that they will use that same energy with love as well.

Last year I started a crowd-funding campaign to bring my Exchanghibition Bank project to the United States. I often manage to accomplish a lot without money, but transport unfortunately always seems to be that area, which definitely does not deal with barter and gift. It was great to see that we reached our fund raising goal, and moreover, all the money donated truly felt like a gift.

Because each time someone donated, and it doesn’t matter if it was one or one hundred bucks, a few minutes later I would receive an email saying how much that person loved the project. It was one of the first times in my left I felt positive about money.

And then something else happened as well. It’s a personal experience and for a long time I didn’t know if it would make sense to the outside world, but if we want money to become something that unites, instead of divides, than our way of using it should become more personal, than the way it operates now, increasingly detached from society. So here it is:

Beginning of this year Peter Koenig invited me to come to a money workshop of his in Amsterdam. He told me I did not have to pay for it as his guest, but I had to spend two days at the workshop. And we all now time is money, isn’t it?

I agreed, but also told him I really only had a day and a half, because needed to finish some stuff. I went for an entire day, thought it was interesting, but it didn’t really touch me. Yet.

But things changed the next morning: First Peter’s wife wanted to buy (or exchange) a banknote of mine. A zero, which was worth five Euros, and she gave me a twenty euro banknote. I wanted to give her change, but she wanted me to keep it.

Then the workshop started and something else happened: Peter had asked people what money meant to them, and then they had to repeat that by saying ” I am ………” filling out the blanks with the phrase that money meant to them . “I am freedom”, “I am security” etc. etc. I think you might know the exercise. Anyway. Since I had said that “money is money”, I ended up saying “I am Money”. It sent lots of spiraling thoughts and visuals through my mind and inspired me to do something.

So I went to Peter, and told him my plans had changed. I told him that instead of leaving after lunch, I would leave now, go home, finish what I had to finish, and then come back. And what’s more, I wanted to do something when I came back. I told Peter: “I am not going to tell you what I want to do, but I want your permission, it’s your workshop after all” He told me to go ahead, and that he didn’t even want to know what I was going to do.

I came back end of the day with my idea, and a bunch of the Exchanghibition Banknotes and felt excited. But once I sat down I became nervous. Normally I like speaking to crowds, and this wasn’t even a crowd, there were like twelve people, but I started feeling shivers down my spine, and cold sweat was dripping down my hands.

So it was the last round, and everybody recapitulated their thoughts, feelings, and lessons learnt during those past two days. I was the last to speak. Peter thought I was waiting because I wanted to make an impact with my final act, but the truth was that I did not want to do it anymore, and I told so to the group.

But then they all said I should do it. So I did it.

I put the banknotes of my project on the floor, and told people I was not going to tell them what they were, but that they were part of a project of mine. Then I told the group that I wanted them to give me money, real money. They could also grab some of my banknotes, but didn’t need to. They could also take the banknotes, without giving me money, and should only give me money if they really felt they wanted to do it.

I only promised one thing: I was not going to use the money for my art project!

After saying this, I felt totally depleted and exhausted and sank back in my chair.

Five minutes later people had given me more than 500 euros

And you know what the weirdest thing was: I was happy with it!

This personal experience is a contribution of Daniel Rozenberg, aka Dadara, founder of the Exchanghibition Bank. With his artwork, Dadara aims to raise consciousness about the functioning & value of money. Thanks Daniel!