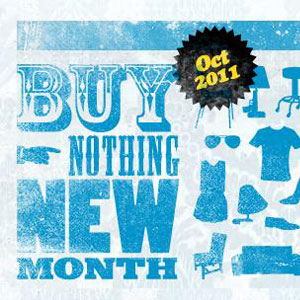 Posted at 21:04h in Inspiration by Jeroen

Recently, the Buy Nothing New Campaign was introduced in the Netherlands. This campaign has the aim of making people aware of  their consumptive patterns. Check it out!

This initiative (originated in Australia) perfectly marks the interesting contradiction between the current economic functioning & the tendency of people not wanting to be succumbed anymore by marketers artificially fueling their consumption.

Our current ‘system’ requires growth in consumption for its survival. Within our current economic paradigm, growth secures jobs and material welfare for all. Without growth, the system would collapse, and thus businesses & governments are doing everything they can to ‘stimulate’ consumption.

Meanwhile, many initiatives around the world are geared towards consuming less. Awareness is growing we aren’t becoming happier by consuming. In the contrary, the stuff you own actually starts owning you.

An evolution towards what some refer to as collaborative consumption is taking place: people are more and more finding each other to swap, barter, share and give products and services with and to each other. Literally thousands of initiatives are stimulating this behavior across the globe*.

Obviously, consumption drops. Now the question is about the tipping point. Will it lead to the collapse of the system? Or does it mark a long started evolution that will slowly relieve the tension of this economic pressure cooker?

Meanwhile check out Buy Nothing New. Thanks for taking the initiative here, Irene!

The Buy Nothing New websites

Our World is Going Free